Lunokhod, which means “Moon Walker” in Russian, was the first roving remote-controlled robot to operate on another terrestrial body. The Soviet Union landed it on the moon in 1970 equipped with a conical antenna, a large directional antenna, two television cameras (the eyes), and a vast array of sensors.

Beatty Robotics was asked to build a functional Lunokhod robot for a new space museum that is being built in Prague in the Czech Republic. As soon as we saw Lunokhod’s Jules Vernes steampunk design we fell in love with it. We were excited to begin. The real Lunokhod is about 8′ long. The museum wanted a miniature version that fit in their exhibit, so ours is about 8″ long. Visitors to the museum will operate it by remote control using the First Person View (FPV) camera.

Lunokhod includes an Arduino Nano microcontroller, an Xbee radio, a Sabertooth motor controller, 8 gear motors, 8 custom-machined wheels, a custom-machined rocker-bogie suspension system, a tub-shaped body, a domed top, a wifi camera, and other components. Because of the robot’s unusual appearance, we designed and machined nearly all of the parts on our CNC, including the spoked wheels, the wheel rockers, the base plate, the rim plate (which turned out to be the most complex part we have ever machined). Working with the truncated-cone of the tub-shaped body was also particularly difficult. But in the end, we love how it all turned out. We hope you like it, too. Pictures and video below. 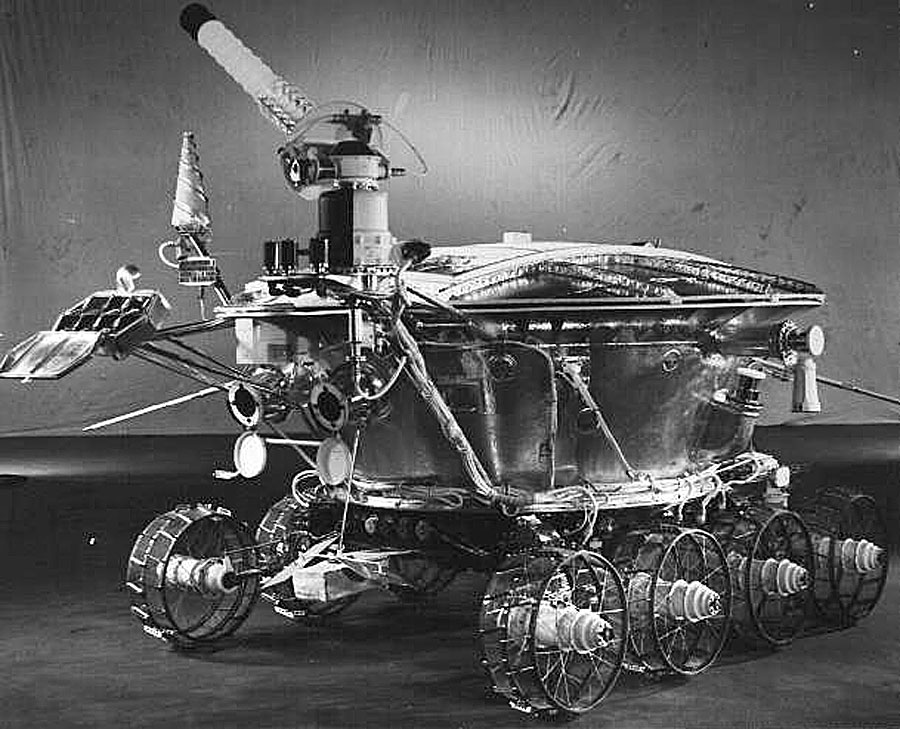 A photograph of the real Lunokhod robot 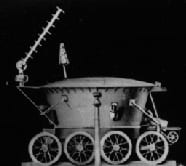 Drawing of the original Lunokhod robot 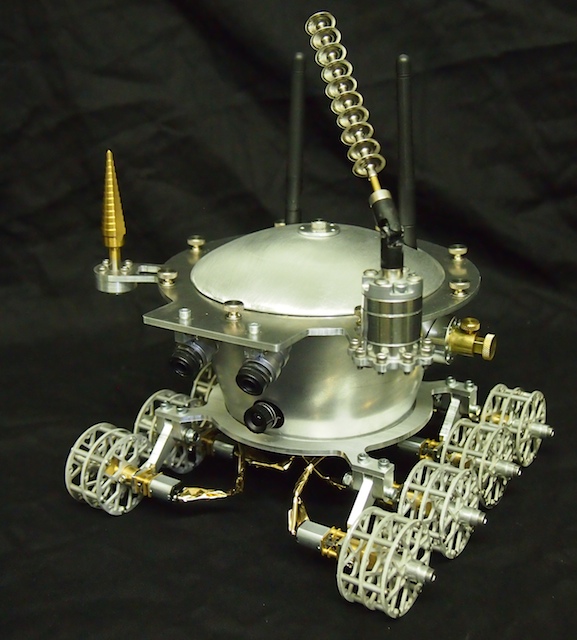 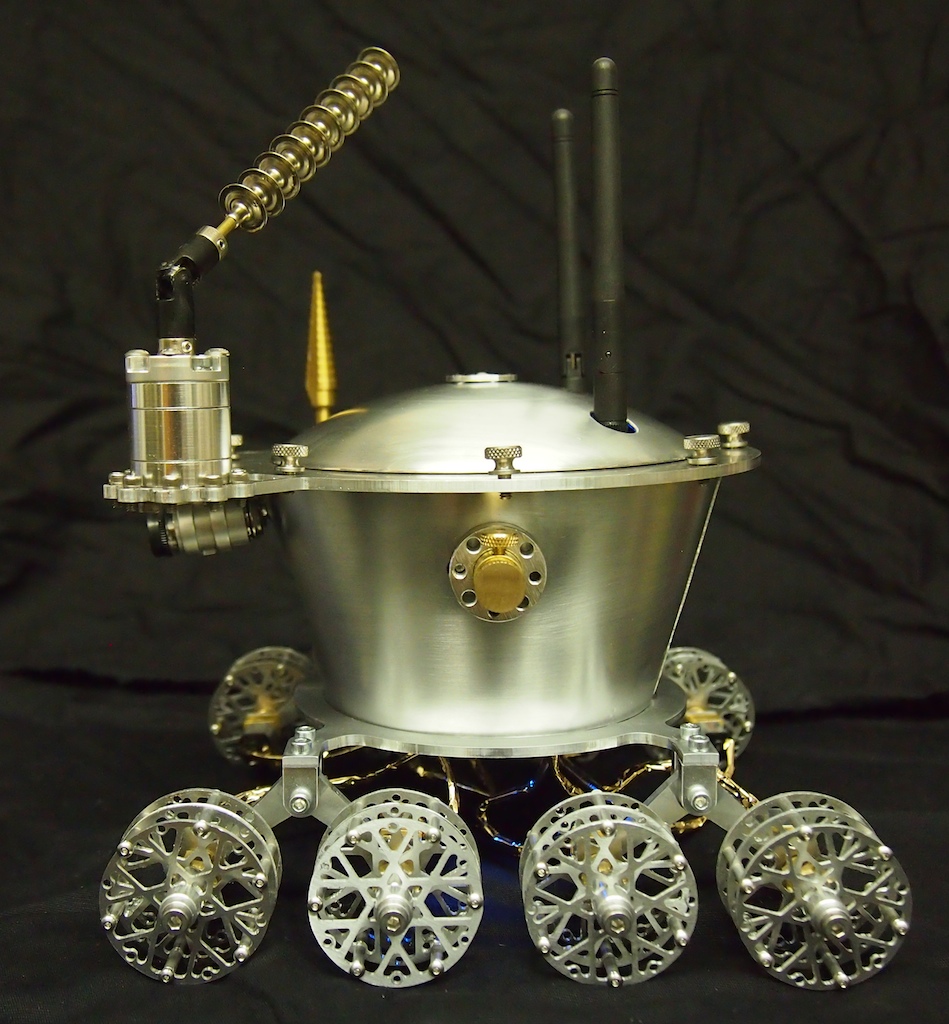 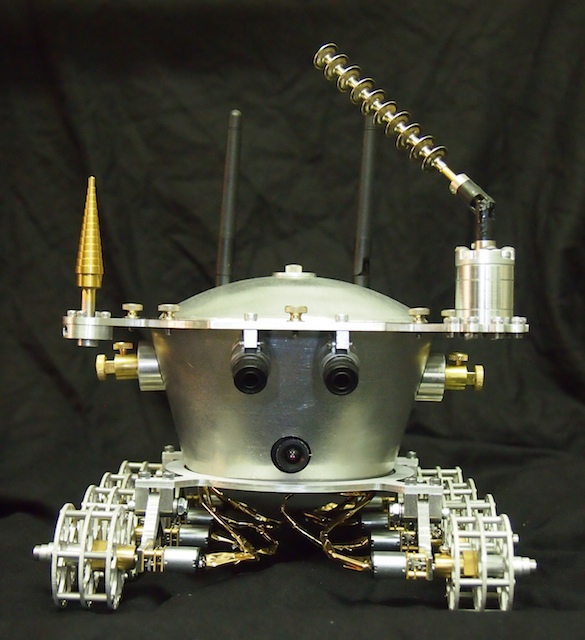 Lunokhod Front View. The black circle at the bottom is a high-definition wifi camera that provides a First Person View (FPV) to the person operating the robot. 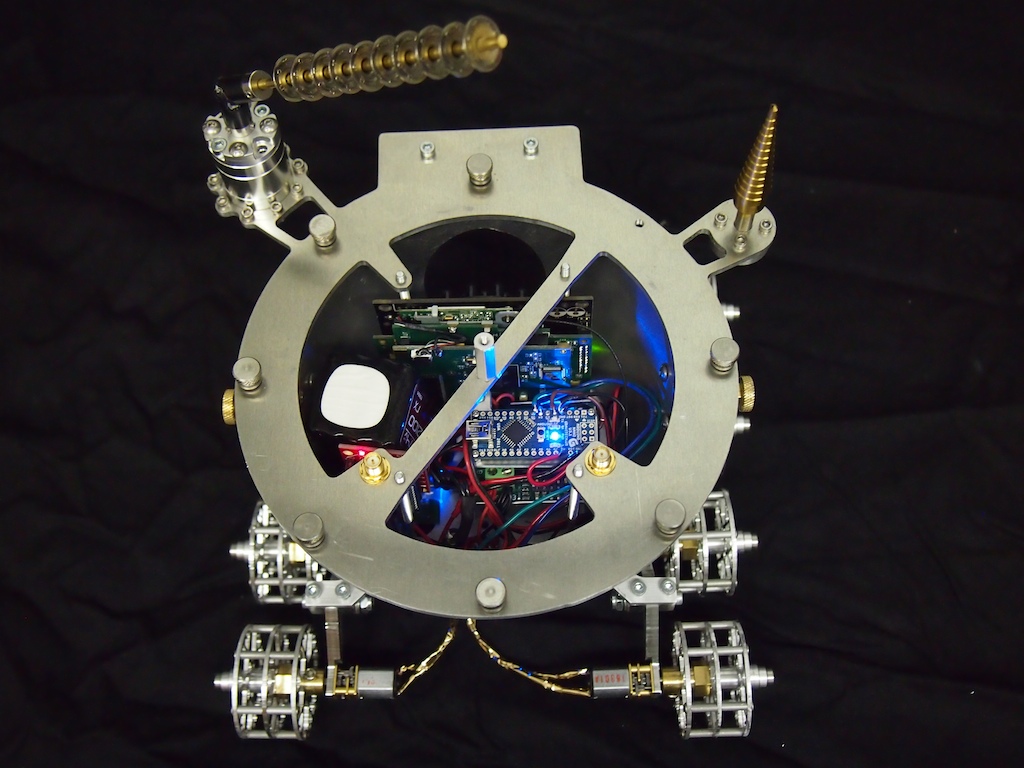 Lunokhod with its top removed so that the electronics are visible inside, including the wifi camera, which takes up most of the room. The Arduino Nano, motor controller, and voltage booster are stacked vertically with custom-machined plates in order to fit them inside. The white and black thing is the 7.4V LIPO battery. The rim plate, with its complex inner and outer contours, many holes, and intricate antenna mounting platforms is the most complex part we’ve ever machined. 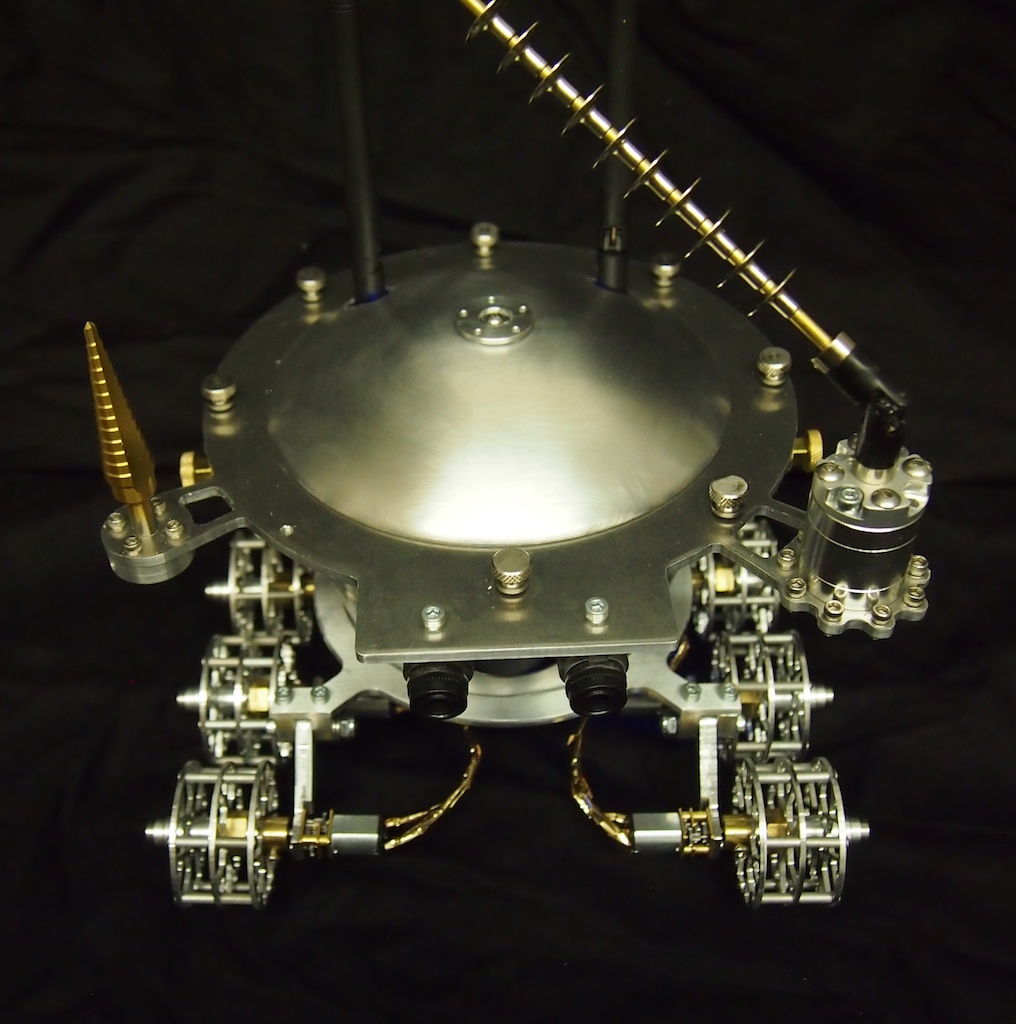 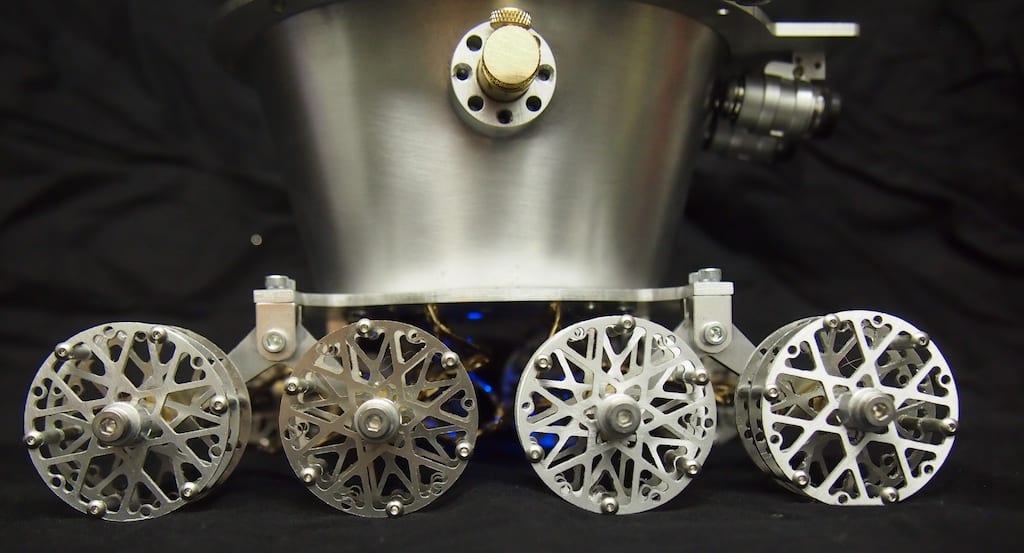 Close up of the Lunohod Wheels. Each wheel consists of 3 separate CNC-machined sub-wheels, plus many machine screws, standoffs, and spacers. These wheels are the most finely intricate machining we’ve done to date.

Lunokhod’s Rim Plate and Base Plate. The two are held together by four long threaded machine screws. Each plate has a round slot so that when they are sandwiched together they hold the cone-shaped body in place. The base plate includes four extensions that hold the four rockers. It also has many holes for securing the electronics and other components. The rim plate includes holes for securing the conical antenna, directional antenna, eyes, and antennas. 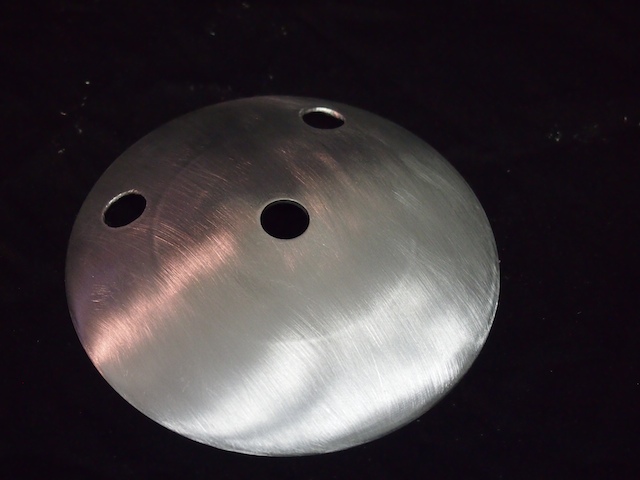 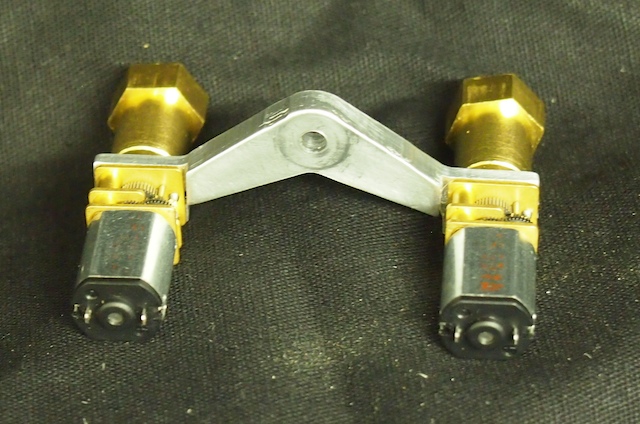 Lunokhod has two rockers on each side. Each rocker allows two wheels to rock on an axle shaft. The micro gear motors are mounted to special surfaces machined into the rocker. 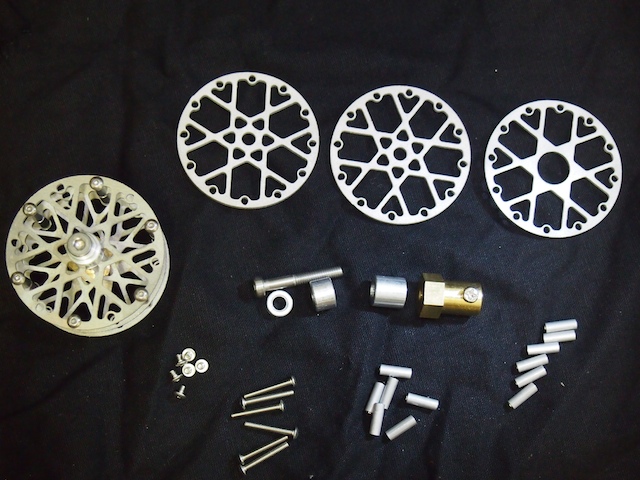 This picture shows the 33 parts that are assembled into each wheel. A fully-assembled wheel is shown on the left.