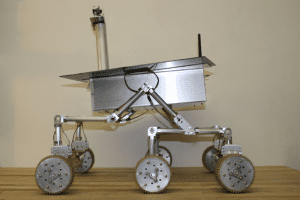 We have always loved the Mars Rover robots Spirit and Opportunity, so we decided we would build one of our own. Today we would like to introduce our Spirit II Mars Rover, which we designed and built in honor of the great Spirit I that explored Mars for more than five years and gathered evidence that there was once liquid water on the Red Planet. The true challenge and fun of building Spirit II was to study and reverse engineer how NASA built theirs. The NASA rovers have several unique and very specific characteristics that we wanted to incorporate into our robot, especially the “rocker-bogie suspension system,” which allows the rover to roll over rocks that are 50% the height of the front 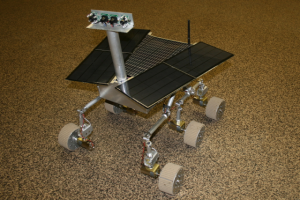 wheel (try that in an automobile!). We watched videos, read the NASA white papers, and even studied their patents. The key to the suspension system was the configuration of the wheels, the multi-jointed swiveling chassis, and a special counter-rotating differential that we built. Mars Rovers also have a very unique way of turning: they use servos to rotate the wheels at each corner 45 degrees, then spin to the desired heading. And, of course, Spirit II is solar powered like the original. Although it was difficult, in the end, we are very pleased with how Spirit II turned out. Enjoy the pictures and video below.

Here are a few construction photos (click the picture to see larger image): 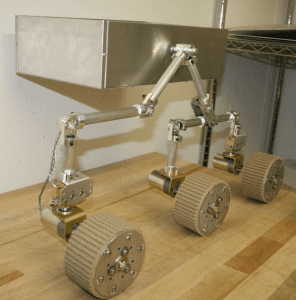 Here we are working on one side of the rocker-bogie suspension system. 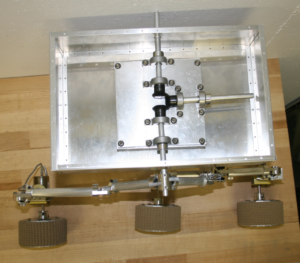 The Counter Rotating Differential we designed and built for our Mars Rover. 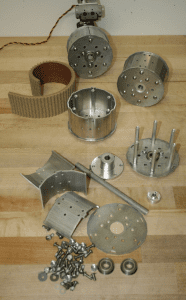 Here we are assembling the wheels, each of which has dozens of pieces. We cut the aluminum shafts, screw the wheel plates together, assemble the universal hubs, attach the treads, and on and on…