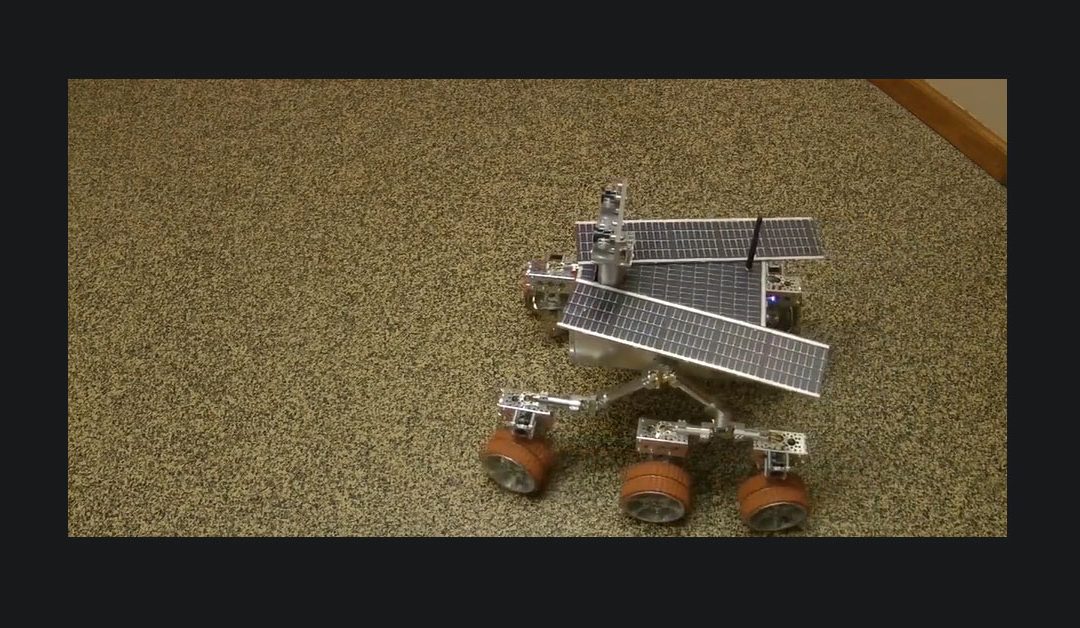 In the video below we have documented our first “basic motion test” on the new Mars Rover. Using our radio-based handheld remote control, we are testing the forward, backward, and rotation of the robot to make sure that it moves smoothly and correctly. We then test the NASA-style rocker-bogie suspension system. The purpose of the rocker-bogie suspension system is to allow the robot to drive over obstacles (such as rocks) and remain relatively steady even if the obstacle is only on one side. The front wheel goes over first while the two back wheels remain firmly on the ground (rotating on the swivel-hub of the rocker-bogie hub, which is between the two back wheels). Once the front wheel is firmly on the ground again, the rocker-bogie on the back goes over the obstacle, one wheel and then the next.

You may also notice a green laser on the robot. The green laser indicates the scan region for the thermal sensor. The robot reports eight temperatures from left to right where ever the laser is pointing. This will be used by science center visitors to scan and identify targets in the exhibit. The results of this first test are described below the video.

The Mars Rover by Beatty Robotics from Camille & Genevieve Beatty on Vimeo.

Overall, the robot performed extremely well in its first motion test. The motors and wheels ran very quietly and smoothly with no noticeable issues, both forward and backward. The steering servos turned correctly and rotated the robot on command in both directions. The robot traveled smoothly with no noticeable noises, vibrations, or problems. All the tubes, screws, hubs, joints, and other components remained in place and performed their function. Mechanically, the robot met all requirements during the motion test.

We noted that the rocker-bogie suspension system worked very well, but as expected, it behaved a little bit differently compared to the first Mars Rover we built. On the first Mars Rover we installed a counter-rotating differential gear box in the central shaft of the robot. When one of the front wheels goes over an obstacle and that side of the robot lifts up, then the other side of the robot is pushed down in the opposite direction (keeping the main box more level). The exhibit at the New York Hall of Science is flat, so we won’t be doing any rock-hopping, so we didn’t install a counter-rotating gearbox (we wanted to keep the design simpler and easier to maintain over time). This means that when one wheel of the robot goes over a large obstacle, both sides lift up instead of just one side. However, overall, the rocker-bogie suspension system still works very well. In fact, because it is more rigid and less gangly, the robot is rock solid, very steady when traveling and when being picked up, and there appears to be no detrimental effects to the simpler design.

There are two known issues at this time that we need to work on: 1. Sometimes when the rover stops, the digital servos (which are known for being jittery) take quite a while to find an equilibrium and settle down. Sometimes they jitter/wiggle when the robot is at rest. This is not a critical problem, but it wastes battery power and we want to improve this situation. 2. The eight sonar sensors, which are intended to measure the distance to the nearest object in the direction of travel, are reporting erroneous distances. This is a critical problem that needs to be resolved, otherwise the robot may run into things when it is driving autonomously. We are working on that now.