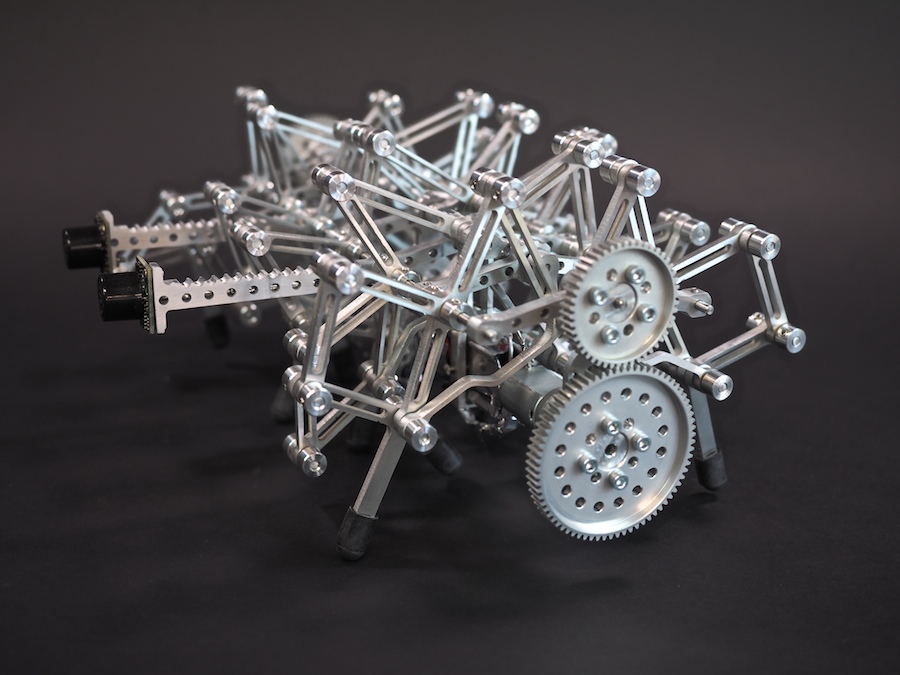 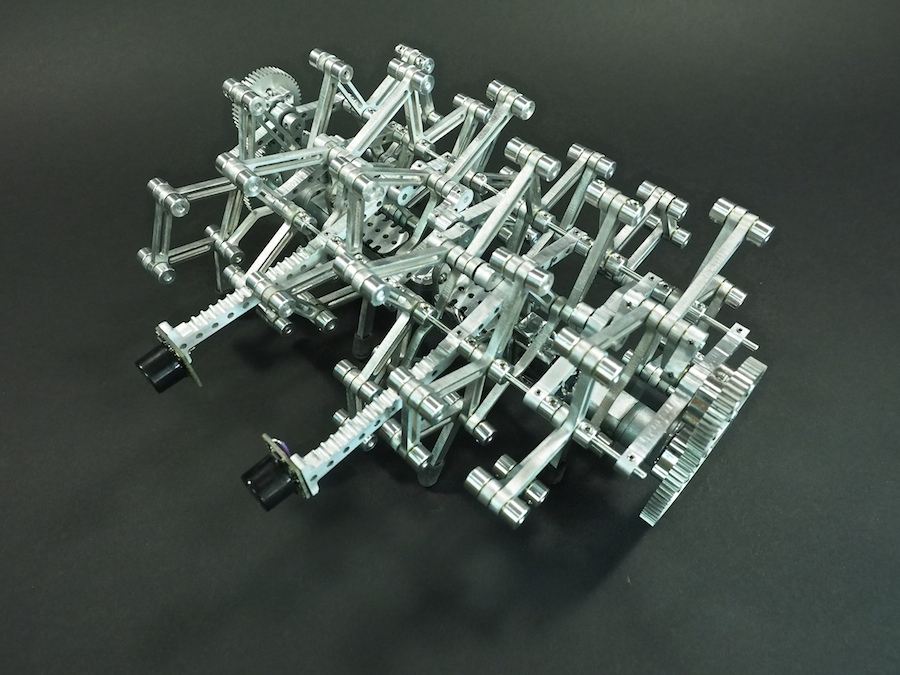 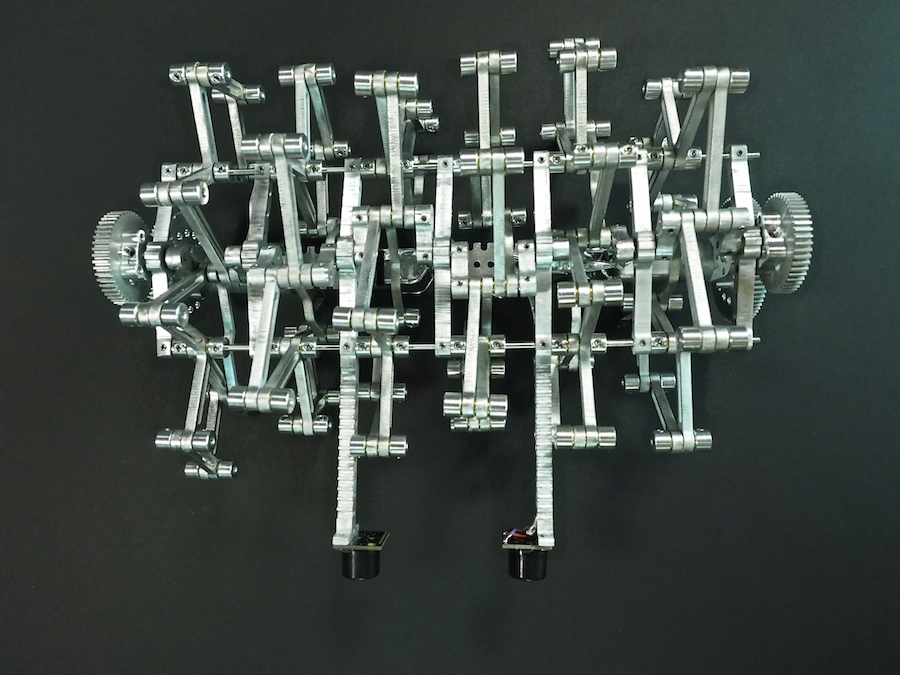 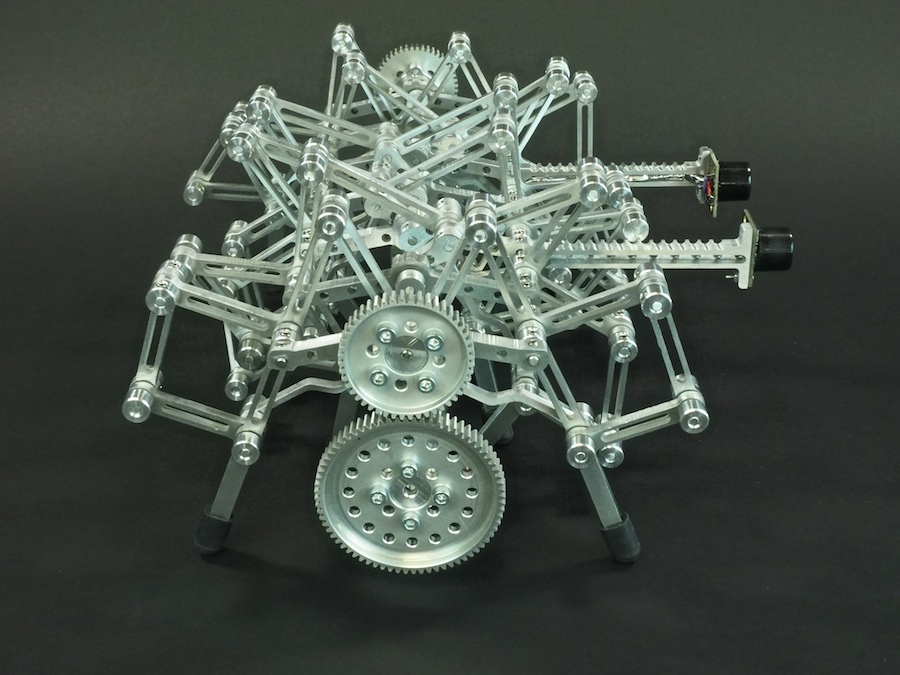 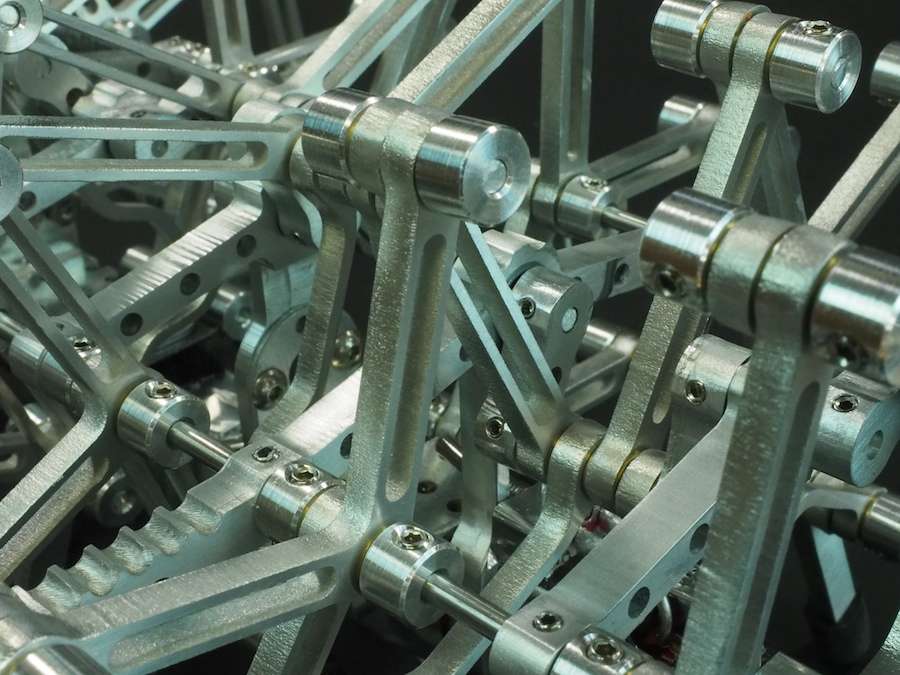 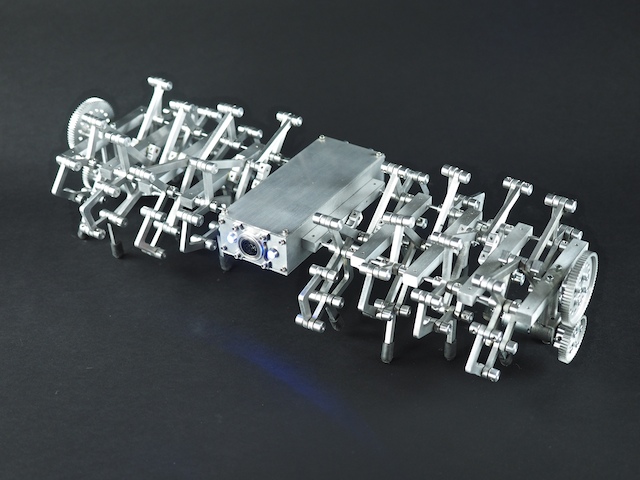 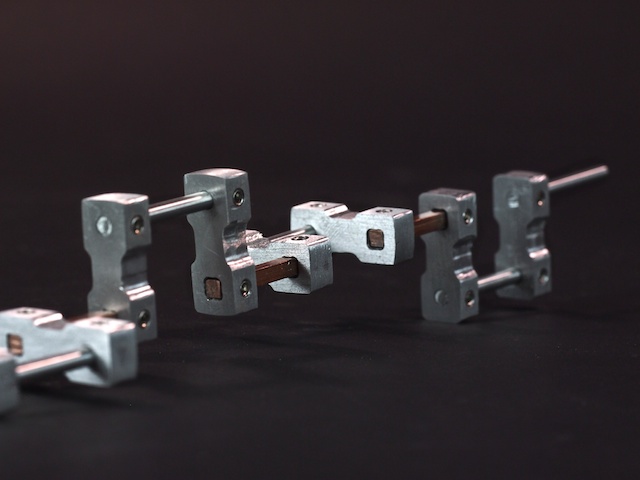 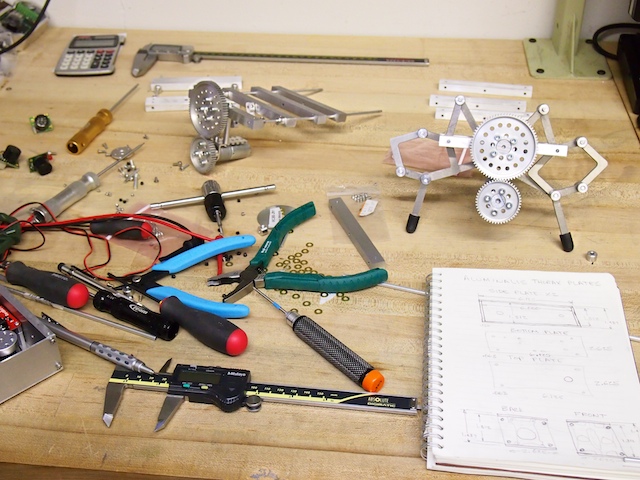 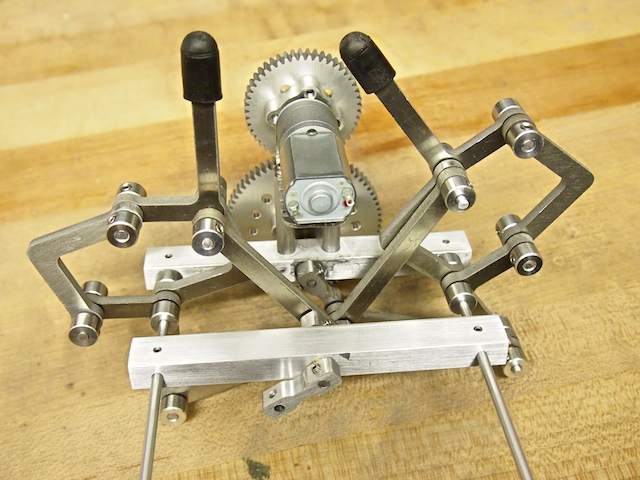 One of the funnest, but most challenging parts of building Aluminalis (our 16-legged walking robot) has been the construction of the two crankshafts. Each side of the robot has a motor that rotates a 10” long, multi-link crankshaft, which drives 4 pairs of legs. The leg pairs need to be kept 90-degrees out of phase from each other in order to produce the walking gait. Our initial vision for the crankshaft was to build it out of 1/8” aluminum round shafts, custom crankshaft arms we made on our CNC, and tiny 4-40 set screws, but when we put it all together for real-life testing, the rotational forces were so high that the set screws couldn’t hold the round shafts, the crankshaft arms slipped out of place, and the entire crankshaft tore apart (not a good day). We went back to the drawing board. We needed a new design. We had the idea of using a square shaft to prevent slippage and guarantee that each of the pairs was 90-degrees out of phase with the others. At first I thought maybe it was a silly, impossible idea. The crankshaft ran through a series of round holes in the body of the robot, so how could a square shaft rotate smoothly in a round hole? Then I realized we could use ball bearings to do that. Our hope was that the square shaft would not only guarantee the 90-degree angle, but it would also give our set screws a flat area to take hold. So, in version two, we used a combination of square shafts, round shafts, larger 6-32 set screws, and bulkier crankshaft arms (that gave the set screws more thread length to take hold). The results were fantastic. The new crankshaft works great in all our real-life tests. Runs strong and smooth. Note that the square shafts are made out of high-strength copper rather than aluminum. 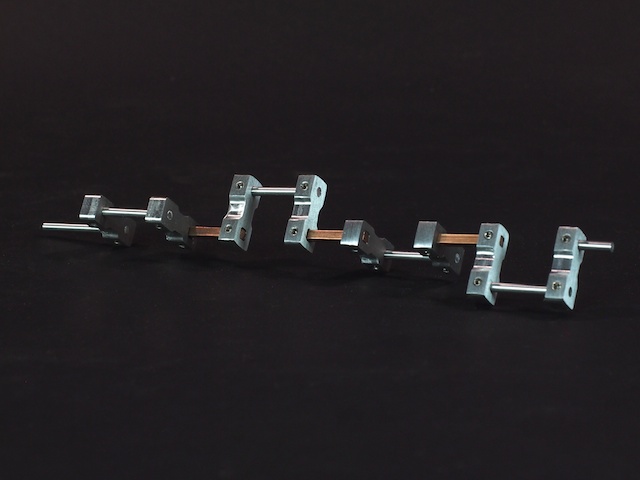 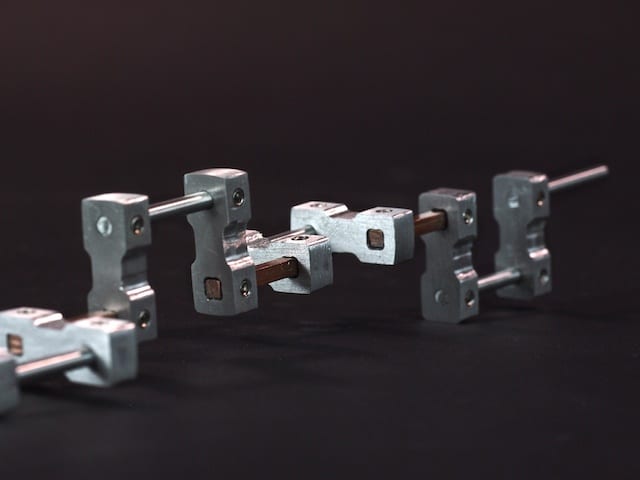 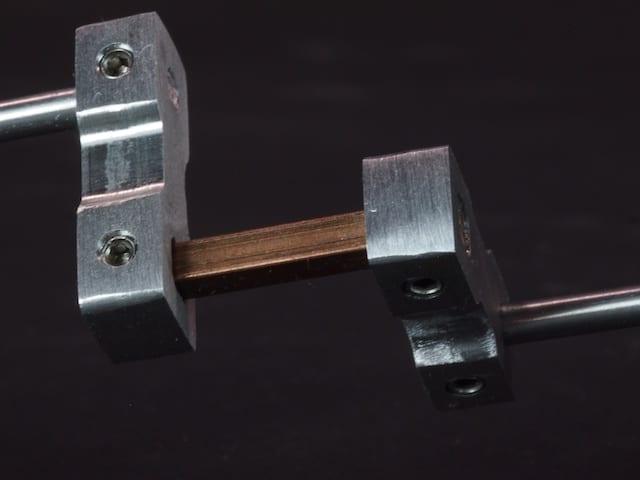 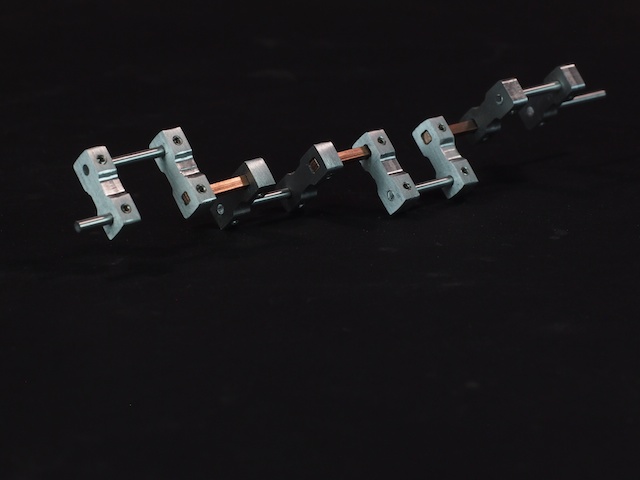 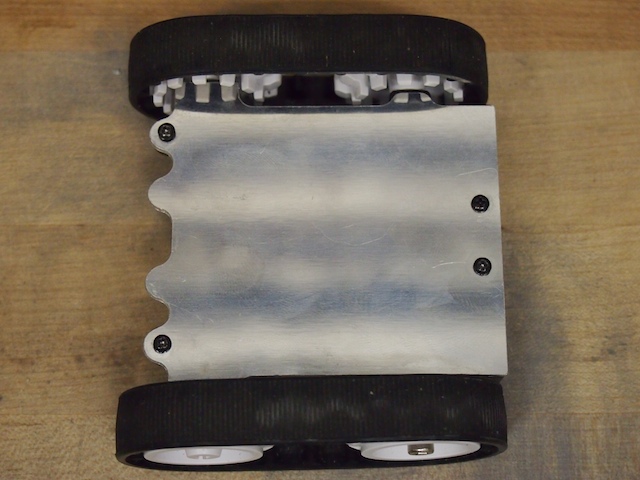 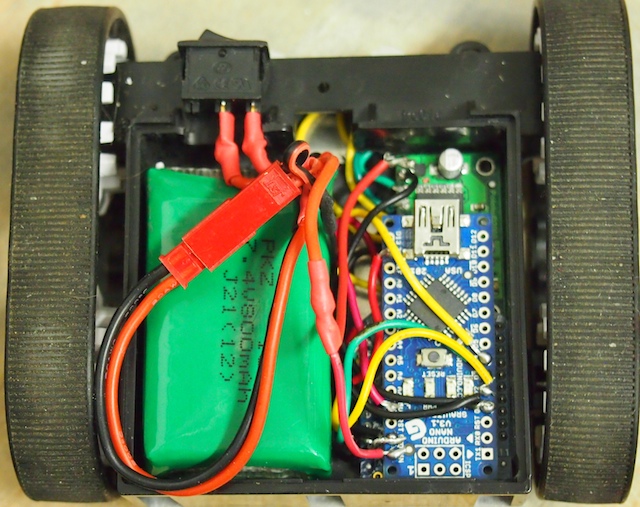 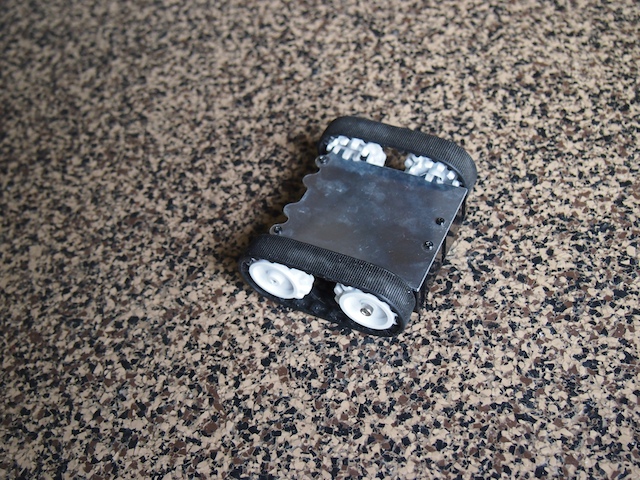 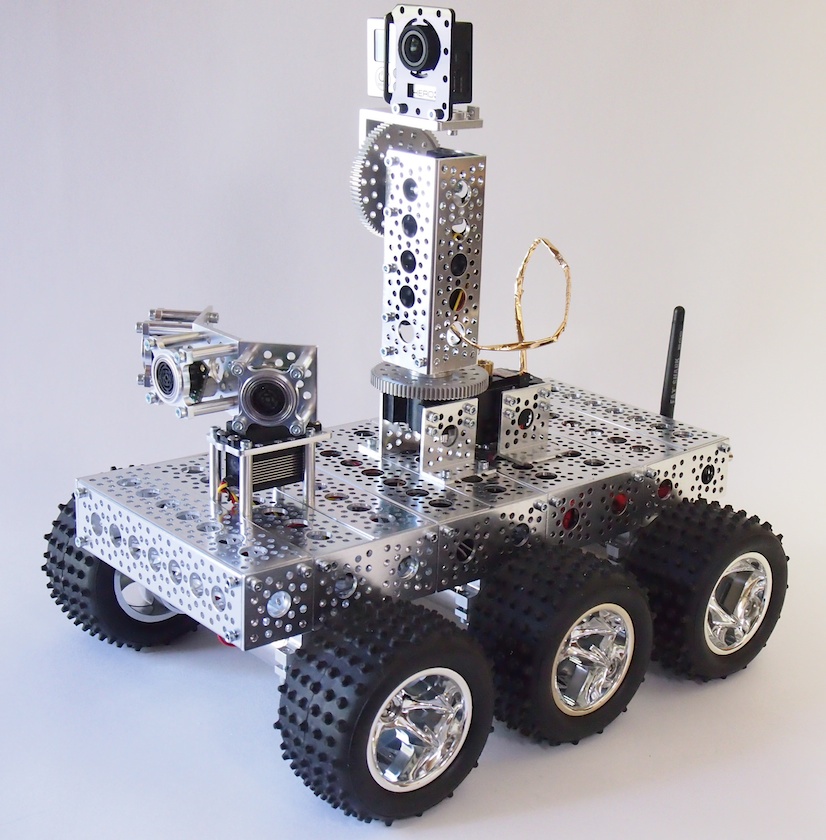 Over the years, we’ve used a lot of different parts to build robots. Lately we’ve been using more and more parts from the new Actobotics product line, which we buy from sites like ServoCity.com and RobotShop.com and Sparkfun.com. A short time ago, the Actobotics team approached us about sponsoring our next build. They asked us to design and construct our next robot entirely out of their parts. When we asked about the project requirements, they said, “Use your imagination. Build whatever your want.” We were delighted to accept their offer. They sent us a box of Actobotics parts and we started exploring what we could do.

We were really impressed by the quality of the machined aluminum parts and the powerful flexibility of their modular, interchangeable design. The parts use two overlapping hole patterns and standardized dimensions so that you can build a lot of different things in a lot of different ways. We soon realized that we could make a dozen different kinds of robots with these parts. But eventually, we came up with a super cool, multi-use 6WD rover. We equipped it with a pan-tilt camera turret with changeable mounts for a Wifi Camera, GoPro Camera, or HackHD FPV camera. This platform would also make a great gun turret for an Airsoft pellet gun or a paintball gun. We were on a roll, so we also equipped the rover with a turret of ultrasonic sensors for Arduino-based autonomous roaming and object avoidance. The great thing about a good rover platform is that you can do all sorts of stuff with it. Thus far, we just have the basics for this robot in place. In the future, we’ll expand on capabilities. Among other things, we are currently working on a custom case for the HackHD camera for use with FPV Video Goggles. We’ll keep you posted.

As we built the rover, we discovered a number of features that we really liked about the Actobotics parts.

Here is a complete list of the Actobotics parts we used to build the Actobot rover:

Please note that we used a variety of #6-32 socket head machine screws, which can also be purchased from ServoCity. For the electronics, we used an Arduino Leonardo (although any type of Arduino would work), Maxbotix ultrasonic sensors, and a Sabertooth 2×5 RC motor controller from Dimension Engineering. Our version of this robot includes both RC-airplane-style Remote Control (RC) as well as Arduino-based autonomous roaming. In many cases, you’ll only need/want one or the other approach, not necessarily both at the same time the way we did it.

Update: We designed a custom case for the Hack HD camera. 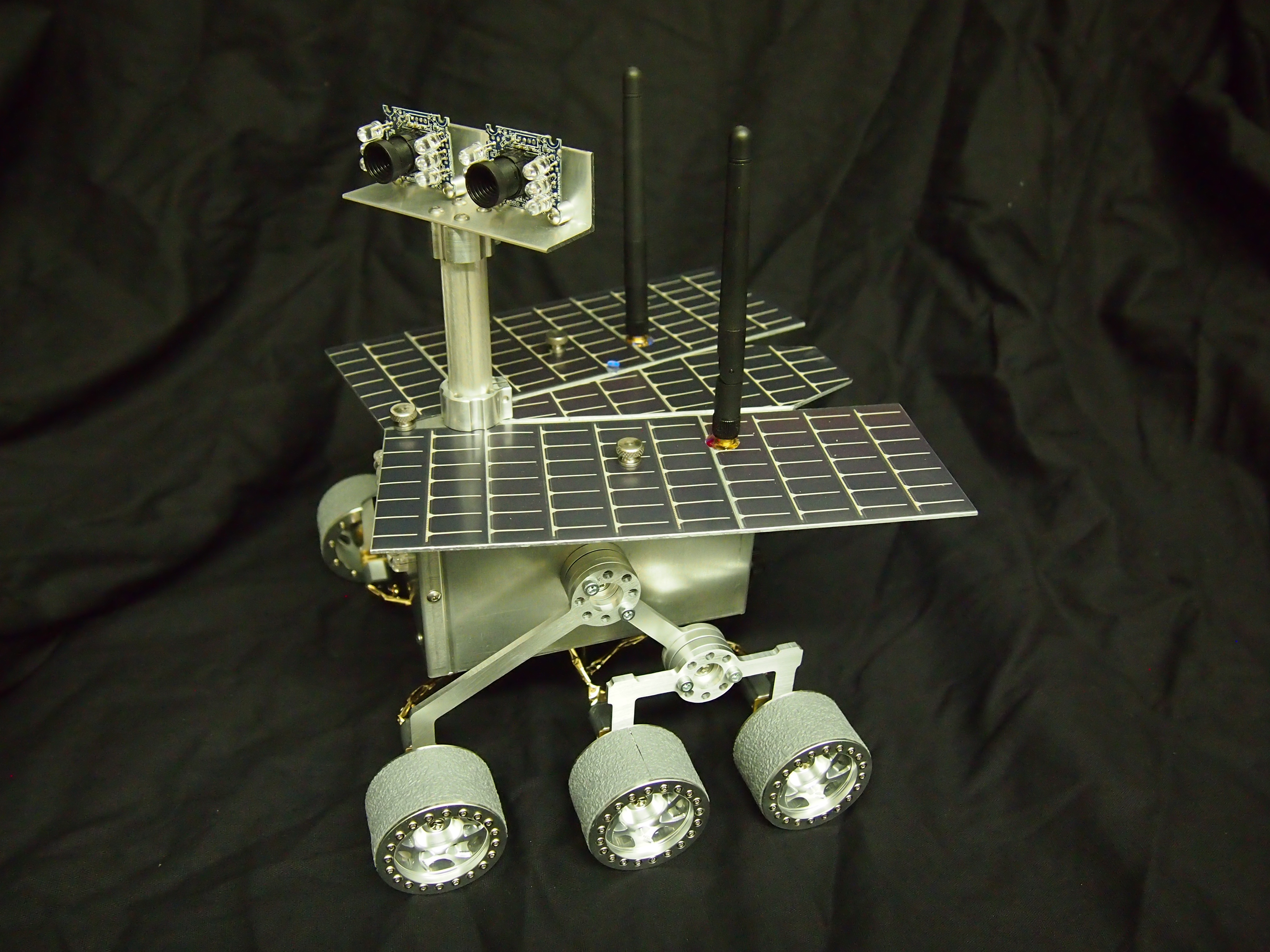