A little bit about Arduinos

The folks over at Newark.com / Element 14 asked us to take a look at some of the Arduino products they carry and we were happy to do it. There’s nothing we like better than playing around with cool tech stuff.

As you probably know, Arduino is an open-source hardware platform for easy-to-use microcontrollers that are ideally suited for controlling, monitoring, and interacting with the physical world. They’re excellent for building robots, sophisticated monitoring systems, artist exhibits, home electronic projects, and much more. Arduino boards come in many shapes and sizes, and are manufactured and sold by a variety of companies (which is the cool thing about open source hardware). At Beatty Robotics, we’ve played around with just about every type of Arduino microcontroller that exists. There are three that we love in particular. Pretty much all our robots use one of these three microcontrollers: 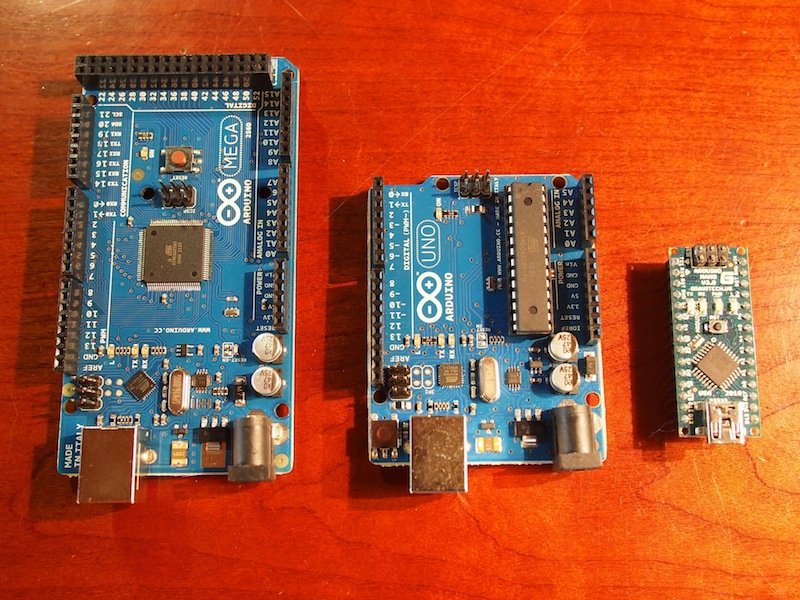 Let’s start in the middle. The Arduino Uno is the classic, quintessential Arduino board. It’s quite a nice, medium size and runs on the ATmega328 chip with 32 KB of Flash Memory. It has 14 digital input/output pins, 6 analog pins, a 16 MHz crystal oscillator, a USB connection, a power jack, an ICSP header, and more. It’s a self-contained little unit and contains everything you need to get started (along with a battery, wires, and something to control, of course). You can do almost anything with the UNO.

Then there’s the big boy of the Arduino world, the “Mega.” The Arduino Mega 2560 is very similar to the UNO in terms of what it can do and how you use it, but it has a more powerful chip and many more pins. Based on the ATmega2560 chip, it has 54 digital input/output pins, 16 analog pins, 4 UARTS (serial ports), a 16 MHz crystal oscillator, a USB connection, a power jack, an ICSP header, and more. For big, complicated projects (like Mechatron, Mars Rover, etc.), we love using the Arduino Mega. The 4 serial ports is a real god-send to us because most of our robots have components that are controlled via serial communication, and it’s nice to have the hardware ports readily available. (You can also program the Arduino to use one of its digital pins for serial communication, but this is trickier and doesn’t always work for all situations.)

Finally, we love, love, love the Arduino Nano. It’s one of the smallest Arduinos made (just .73″ x 1.70″). We use it on all our smaller robots. Despite its miniature footprint, the Nano has similar capabilities to the Uno: ATMega328 chip, 14 digital pins, 8 analog pins, a 16 MHz crystal oscillator, a small Mini-B USB connection, a ICSP header, and more. On the other hand, the Nano doesn’t come with ready-made pin headers or a power jack, so more soldering is required (which doesn’t bother us, since Genevieve loves soldering tiny stuff like the Nano, but it might bother some). The Nano is also a bit more expensive than the Uno. So, if small size matters, think about the Nano, otherwise, stick with the Uno.

After experimenting with most of the various types and sizes of Arduino boards (there are more than a dozen), these are the three types that we use for most of our projects. All of these Arduinos are available from a variety of vendors, including Newark.com / Element 14. I’ve provided links below.

Newark / Element 14 also sent us a neat new product that I’m looking forward to using in a future product. This is a plastic Arduino enclosure so that you can put your electronics project in a nice package while protecting your Arduino board at the same time. I’ve tried a variety of these from various vendors in the past and always thrown them out because they don’t usually work too well, but this one  is excellent. Both the UNO and the MEGA fit into the enclosure perfectly, just slide the microcontroller onto the five perfectly-positioned posts, then snap the top into place. You don’t even need a screwdriver. And it encloses your Arduino quite nicely, leaving  perfectly-sized openings for the USB jack and the power jack. There is also a little plate that you can optionally pop out where you can run your jumper wires and other inputs/outputs. This enclosure turns your Arduino board into a nice little package. I’ve provided a picture below. The Arduino Mega is mounted inside the bottom half of the enclosure. The top half of the enclosure is shown in the middle of the picture. 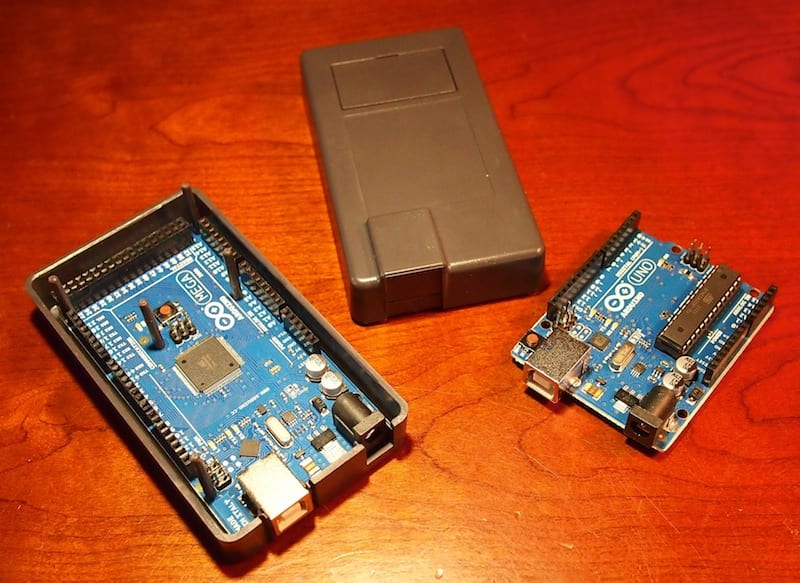 So, pick the Arduino that meets your needs the best and have fun with it. Please note that all the Arduinos use the same Arduino software environment and you program them in the same way. Your source code will run on any of them. (other than a few differences in addressing ports in some very technical situations that you probably won’t encounter). So, even if you start out with one Arduino, you can easily change your mind later and swap in a different one.

Here are links to the Arduino boards and the Enclosure: